Racing in the name of Quarter Moon Ranch LLC and trained by Scott Powell, the bay stallion won the $150,000 HH Sheikh Zayed bin Sultan al Nahyan Jewel Crown bonus for the second consecutive year, 5 out of 10 starts, including 3 grade 1 stakes, and earned over $177,000. By leading sire Burning Sand, out of AK Loretta, by Virgule Al Maury, Paddys Day was bred in Texas by Jane Teutsch. His lifetime earnings are approaching $400,000.

Leading jockey Ricardo Chiappe was unable to attend the ceremony to pick up his trophy for Champion Jockey. Scott Powell, who led all trainers by earnings, rounded out the night winning as Outstanding Trainer. Joe and Betty Gillis, who have been in the Arabian racing business for a quarter of a century, picked up the Darley trophies for both Outstanding Owner and Breeder just like they did last year. In addition, their colt Easter Man was named champion 4-Year-Old Colt.

The following international individuals were recognized:

Saturday at The Races

Saturday saw Horse of the Year Paddy’s Day square off against 11 other rivals in the $100,000 HH Sheikha Fatima Bint Mubarak Darley Award S. (Gr.1) at beautiful Santa Anita Park. It was a thrilling race that saw the favorite, ridden for the first time by thoroughbred legend Victor Espinosa, win the 1 1/16 mile race in 1:54.77, just off the track record set by Thess Is Awesome last year. Easter Man ran well for second with Sand Victor third. Even with it being the last race on the 11-race card, the on-track handle was around $700,000. As the winner, Paddys Day gets an automatic entry into the 1.2 million Euro HH Sheikh Zayed bin Sultan al Nahyan Jewel Crown in Abu Dhabi in November, a race in which he has competed in 2015 and 2016.

The Gala Dinner and Auction on Sunday

On Sunday evening, the HH Sheikha Fatima Bint Mubarak Annual Darley Awards Gala Dinner was held at the Beverly Wilshire Four Seasons Hotel. The highlight of this fantastic evening was the annual Arabian Racing Cup Stallion Breeding Auction, which attracted international attention on the 9 coveted breedings. The bidding was exciting and a total of $68,500 was raised to support the Cup’s racing and breeding incentive projects. The highest bid of the auction was $23,000, paid by Nate Newby for a breeding to top stallion Munjiz.

Chief Steward Michelle Morgan expressed her excitement. “What a great weekend!” she said. “Congratulations to all the 2016 Darley winners on Friday night. Racing at beautiful Santa Anita race track was a wonderful way to celebrate Paddys Day’s big night. The Gala dinner and Arabian Racing Cup Stallion Auction were huge successes. It was a perfect weekend, and we are already looking forward to the 2017 Darleys. Thank you to HH Sheikh Mansoor Bin Zayed Al Nahyan, HH Sheikha Fatima Bint Mubarak and Lara Sawaya for making this all possible.”

Please check back here at the Cup website for details about next year's events as they become available. 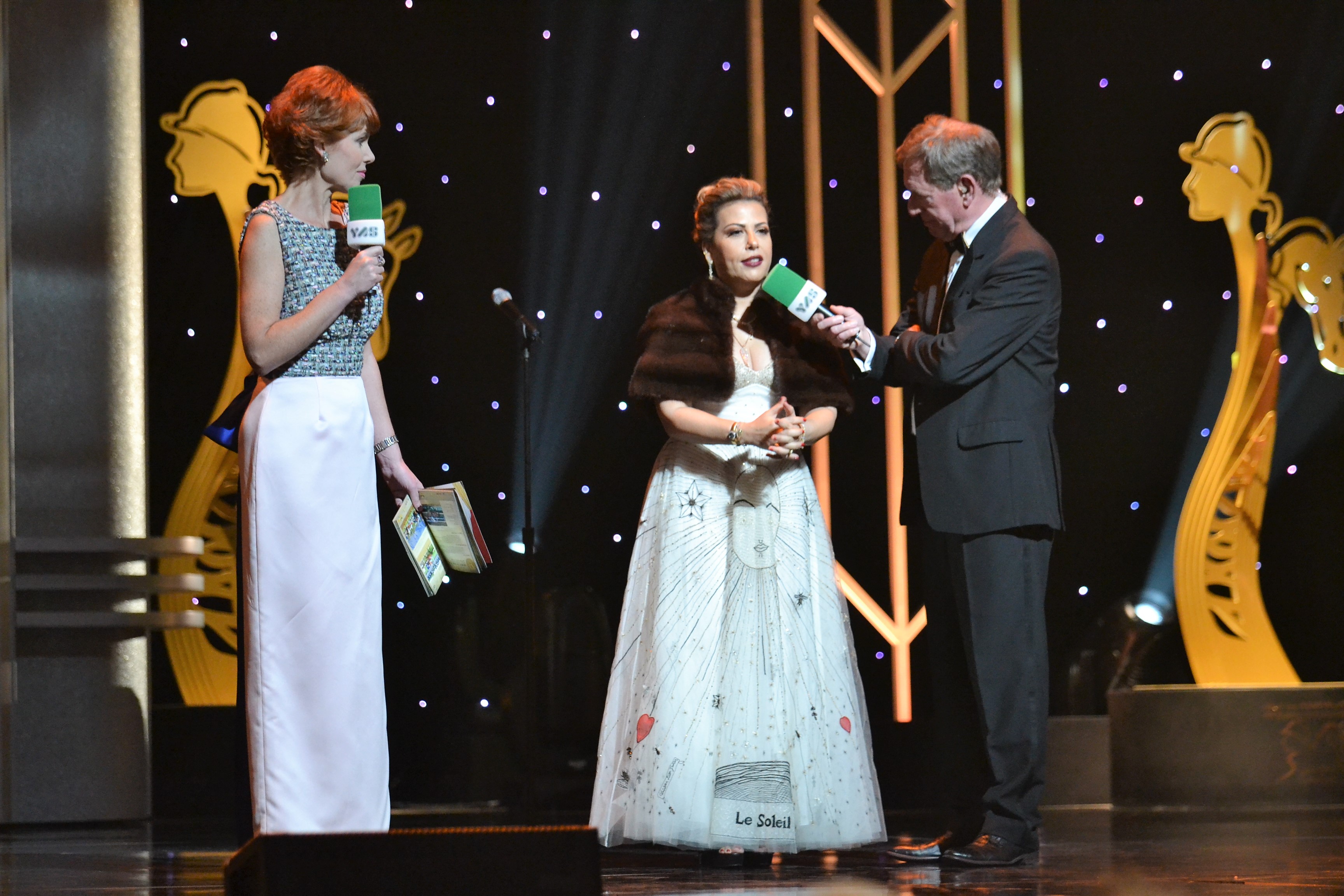 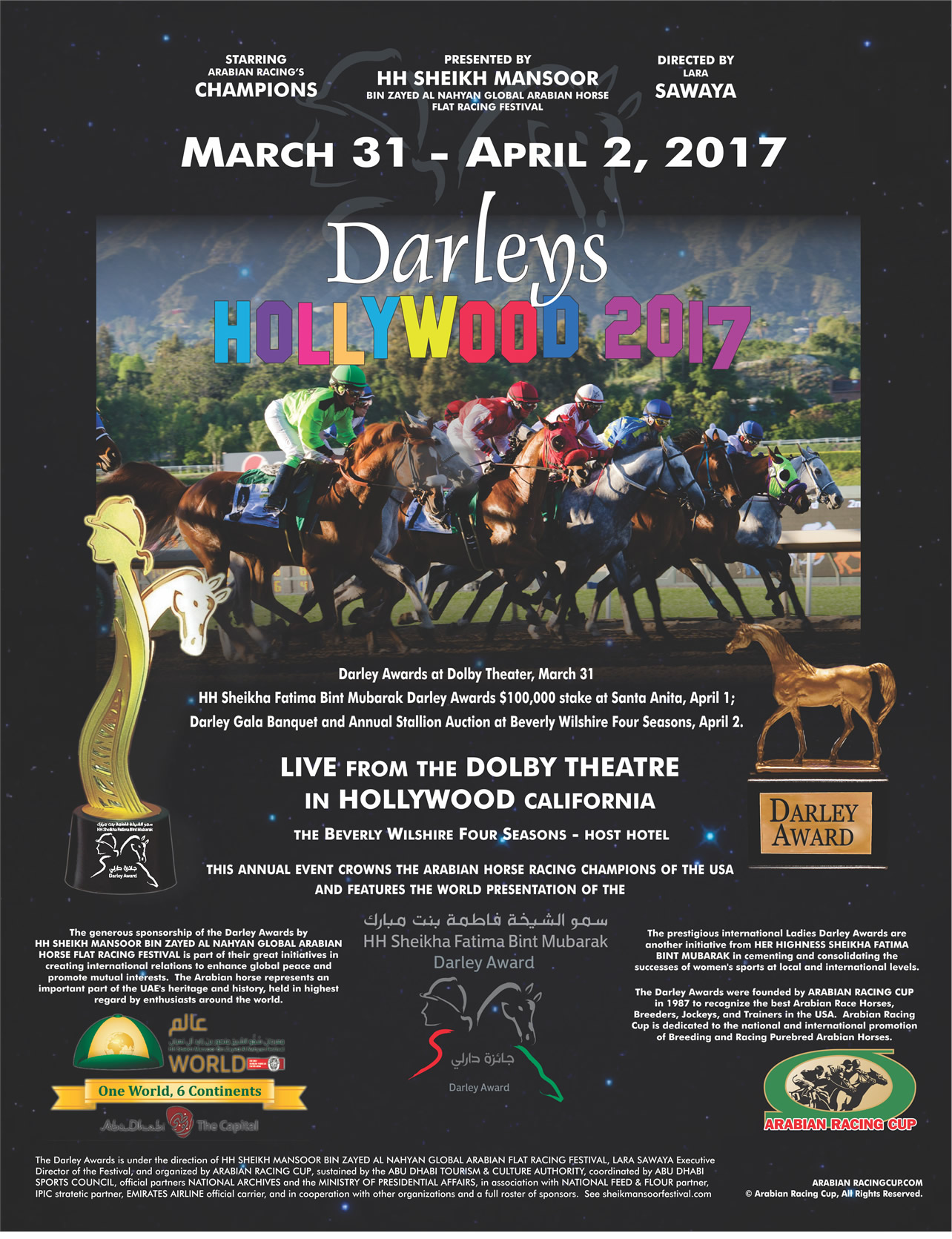 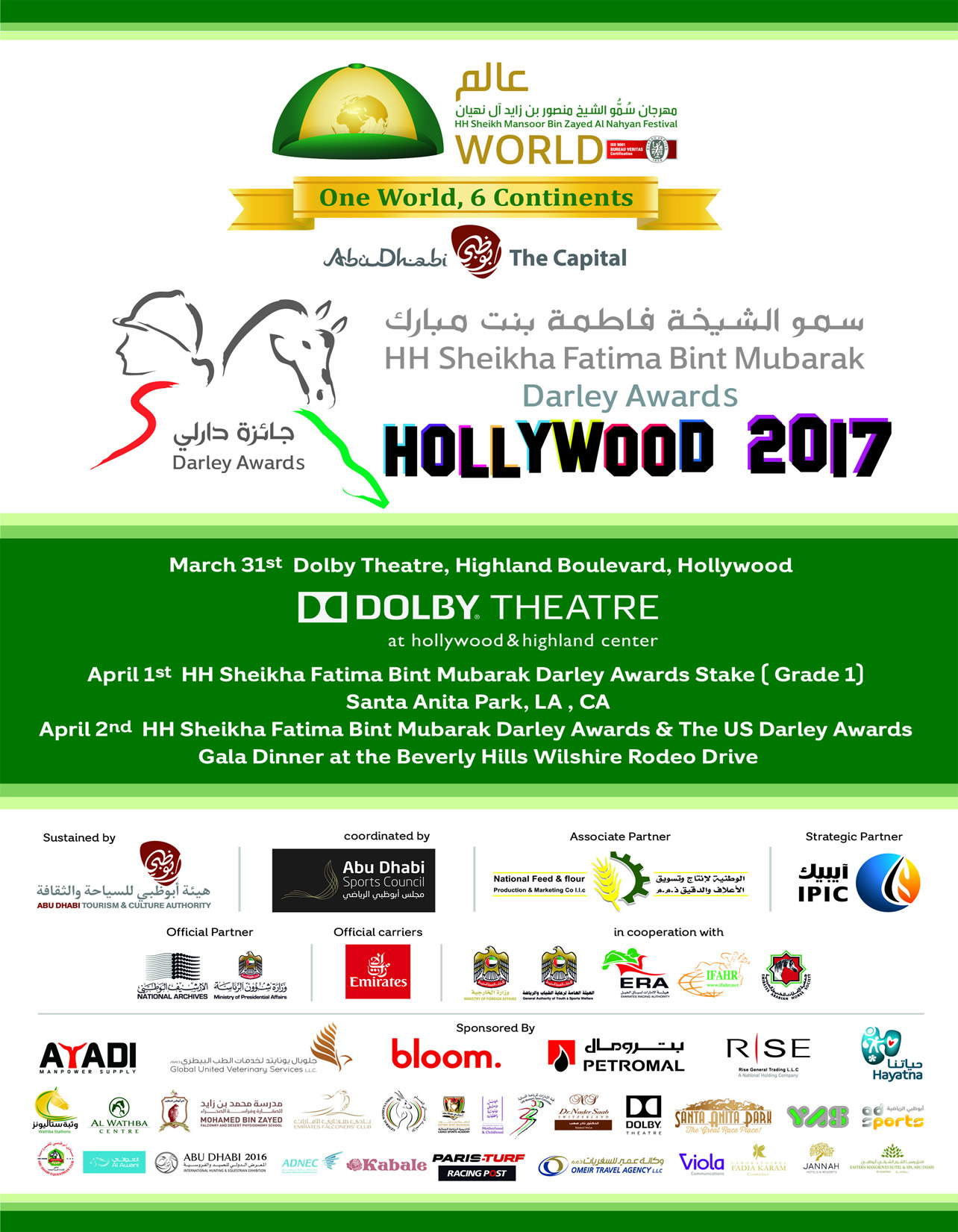 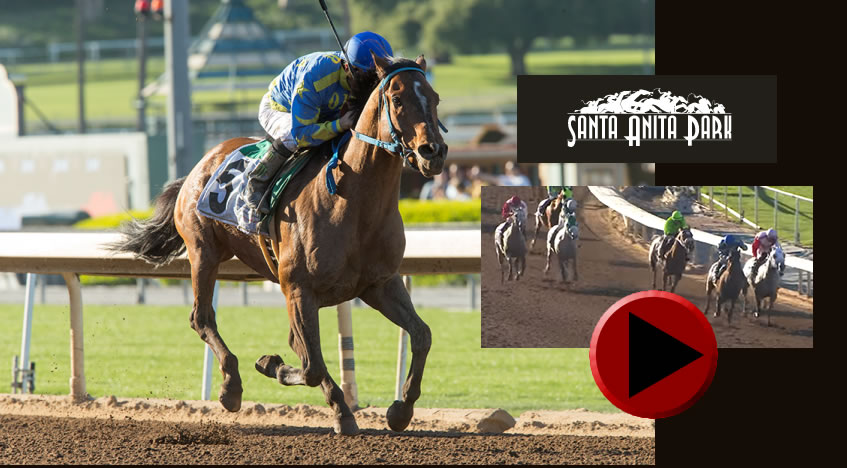 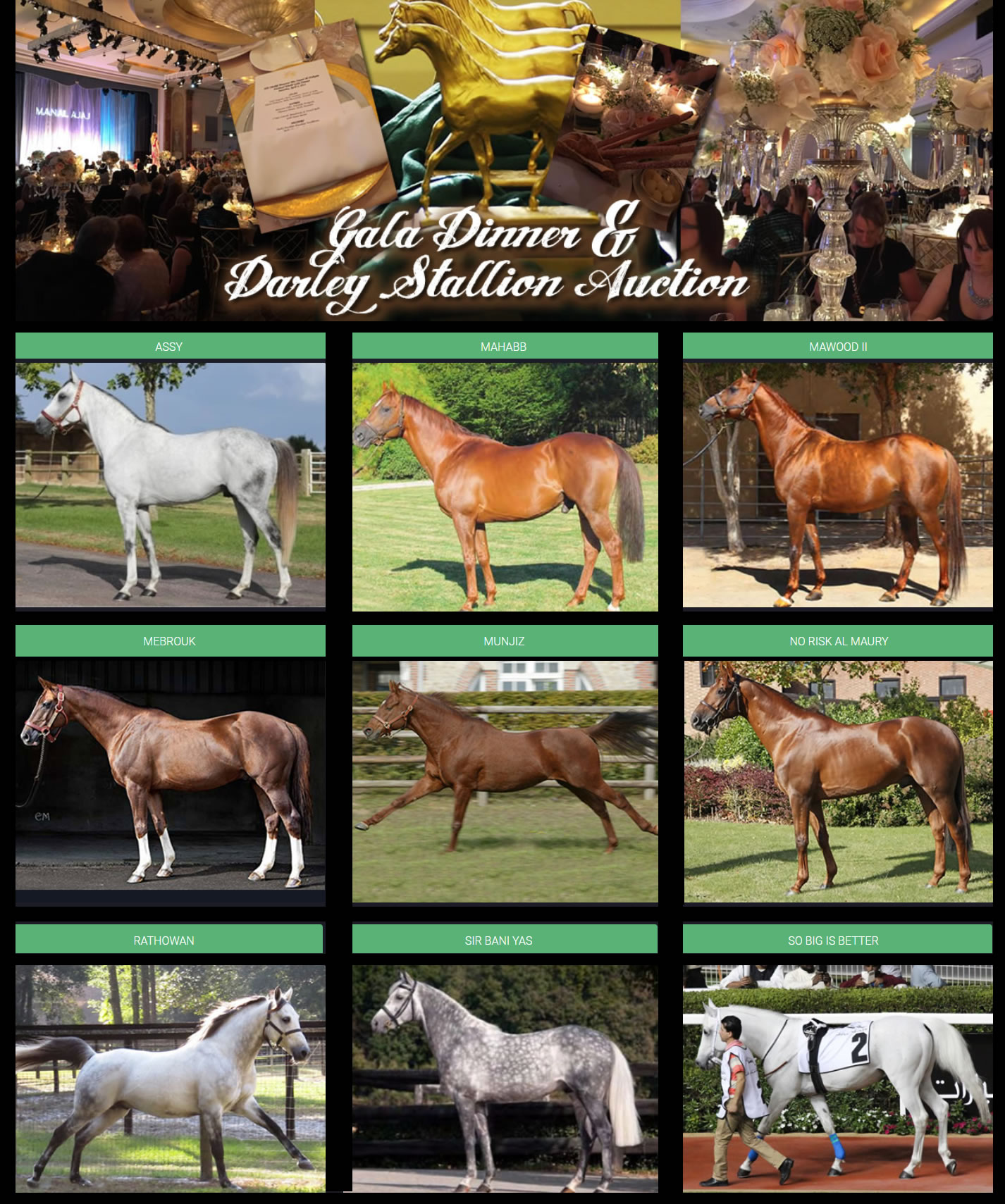 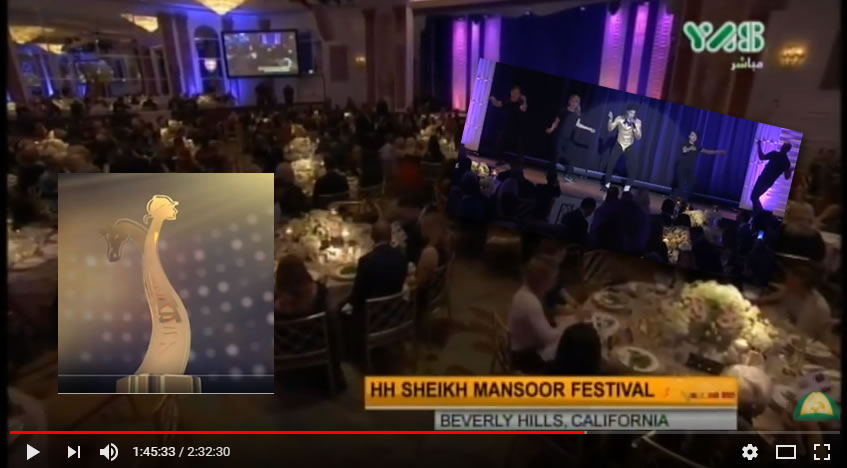